Commemorating the 150th anniversary (1865 – 2015) of the assassination of Abraham Lincoln, the authors of an independent study announced the results of the Nancy Hanks Lincoln mtDNA Study on October 21, 2015.

Abraham Lincoln is a monumental figure in our nation’s history, yet his mother’s maternal ancestry has been debated for over a hundred years. Most historians agree that Nancy Hanks was the illegitimate daughter of Lucy Hanks who had a second illegitimate daughter, Sarah “Sally” Hanks, before marrying Henry Sparrow and giving birth to eight more children. So the question then becomes, “Who were the parents of Lucy Hanks (Sparrow)?”

While most have believed Lucy Hanks (Sparrow) was the daughter of Joseph Hanks and Ann “Nancy” Lee of Richmond Co., VA and Nelson Co., KY, others have claimed Lucy Hanks (Sparrow) was born Lucy Shipley who prior to her marriage to Henry Sparrow had been married to a James Hanks, a supposed son of Joseph and Ann Lee Hanks, making her their daughter-in-law instead of daughter. They have further claimed that she was one of five Shipley sisters, two of whom were Naomi Shipley (Mitchell) and Rachel Shipley (Berry). This study addresses this long standing controversy and seeks to provide an authoritative reference sample of Abraham Lincoln’s mitochondrial DNA (mtDNA).

MtDNA samples were also collected from matrilineal descendants of two Shipley sisters – Naomi Shipley who married Robert Mitchell and Rachel Shipley who married Richard Berry, Sr. This group shall be identified as Group-B. Matching HVR1 and HVR2 results for these two samples are Haplogroup H, indicating Group-B descendants do not descend from the same maternal line as Group-A.

In summary, these results can be used with confidence as a reference for DNA testing of Abraham Lincoln artifacts and for distinguishing between the two accounts of the parentage of Nancy Hanks. By including participants from multiple lines of descent from Ann Lee Hanks, the results conclude that Lucy Hanks Sparrow was not a sister of Rachel Shipley and Naomi Shipley and the results provide evidence supporting the conclusion that Lucy Hanks was a daughter of Ann Lee Hanks. All matrilineal lineages were researched by the study authors.

Update… February 24, 2016 New test results for a descendant of another daughter of Lucy Hanks and Henry Sparrow, Elizabeth Sparrow who married Claiborne Franklin, are also an identical X1c match to Group-A. 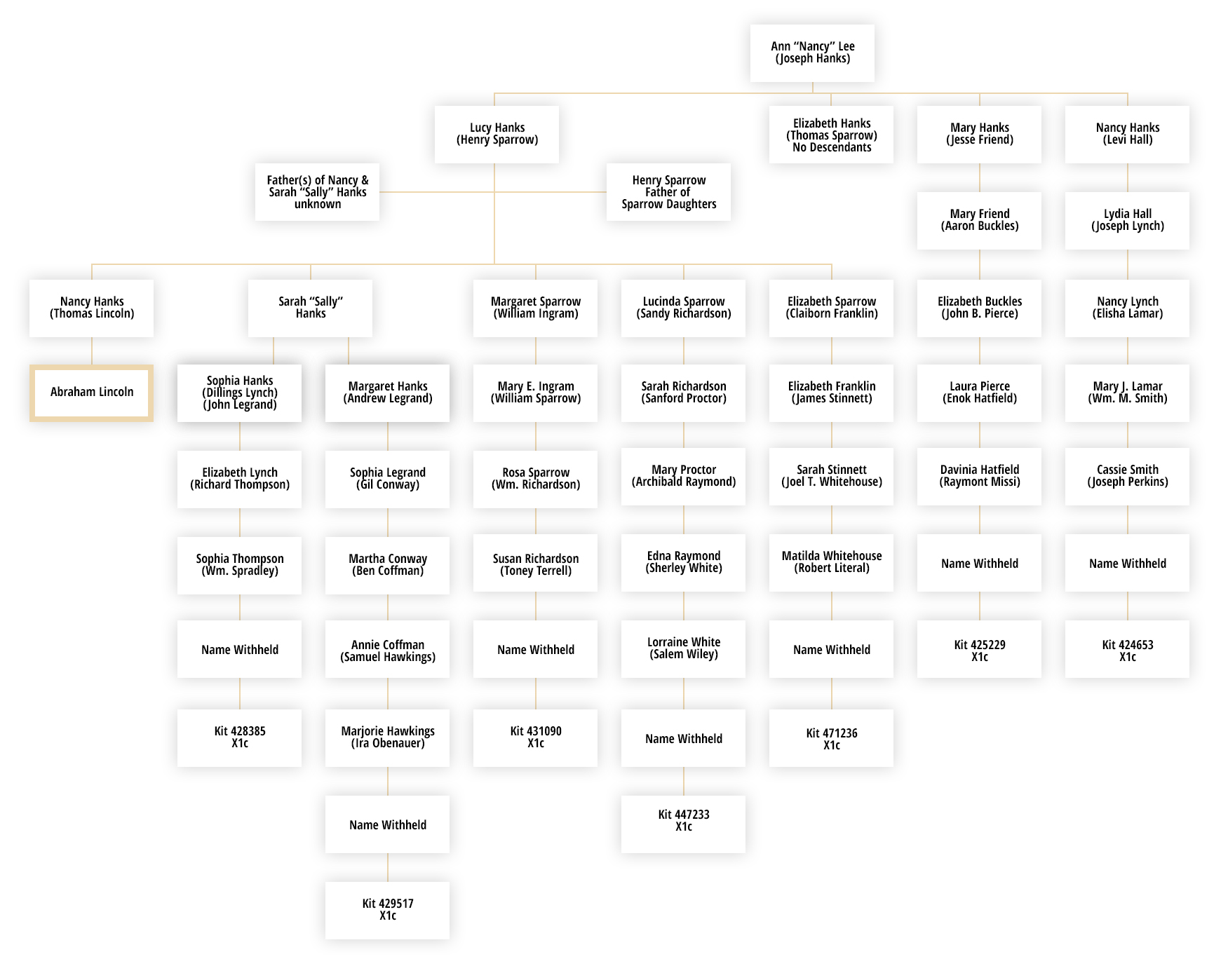 Lincoln’s law partner of seventeen years, William Herndon, claimed that Lincoln had told him that Lincoln’s mother, Nancy Hanks, was illegitimate, meaning that her mother was a Hanks by birth. This account was followed by virtually all Lincoln biographers until 1900.

In the 1920s, Lincoln biographer William Barton concluded that Nancy Hanks Lincoln was the daughter of Lucy Hanks Sparrow, born before Lucy Hanks married Henry Sparrow. He further maintained that Lucy Hanks was the daughter of Joseph Hanks and Ann “Nanny” Lee of Richmond Co., VA and Nelson Co., KY. Lucy was therefore, according to Barton, a sister to two other daughters of Joseph and Ann Lee Hanks — Nancy Hanks who married Levi Hall and Mary Hanks who married Jesse Friend.

Barton’s view was opposed by Louis Warren, who agreed that Lucy Hanks Sparrow was Nancy Hanks’s mother, but contended that Lucy Hanks Sparrow was not a Hanks by birth. Instead, he claimed she was one of several sisters named Shipley. One of these sisters was Naomi Shipley, who married Robert Mitchell, and one was Rachel Shipley, who married Richard Berry Sr. Warren contended that Lucy had been married to a James Hanks, whom Warren claimed had been a son of Joseph and Ann Lee Hanks, before she married Henry Sparrow.

In 1998, Paul Verduin provided a genealogy of the Hanks family for the book Herndon’s Informants, edited by Lincoln historians Douglas L. Wilson and Rodney O. Davis. In this genealogy, Verduin agreed with Herndon and Barton that Lucy Hanks Sparrow, the mother of Nancy Hanks Lincoln, was a daughter of Joseph and Ann Lee Hanks, and that Nancy was therefore illegitimate. He also concluded that Lucy Hanks had a second illegitimate daughter, Sarah “Sally” Hanks, before marrying Henry Sparrow. Lucy then had eight more children with Henry Sparrow, four girls and four boys. Verduin also concluded that Sarah “Sally” Hanks had six illegitimate children of her own, including Sophia Hanks Lynch Legrand and Margaret Hanks Legrand.

NOTE:  You can read more about the various theories on the ancestry of Abraham Lincoln’s mother, Nancy Hanks on Rich Hall’s FamousKin.com website:  https://famouskin.com/articles/lincoln_hanks_debate.php

NOTE:  Lincoln scholar Richard G. Hileman gave a presentation of the historical detail of the Nancy Hanks Lincoln mtDNA Study in October 2016 at the Conference on Illinois History at the Abraham Lincoln Presidential Library in Springfield.  The presentation was given again in October 2017 at the Allen County Public Library in Ft. Wayne, IN.  The video of Rich’s second presentation, “The Search for Nancy Hanks” can be viewed at https://archive.org/details/4260270

The authors of the Nancy Hanks Lincoln mtDNA Study:

Suzanne Hallstrom has been administrator of the Hanks DNA Project since its inception in 2002, leading to her interest in the use of mitochondrial DNA to solve difficult genealogical questions. Realizing that no prior studies had resolved the controversy surrounding the maternal ancestry of Nancy Hanks Lincoln, Suzanne started the Nancy Hanks Lincoln mtDNA Study in 2015.

Nancy Royce is an avocational genealogist who, as a descendant of Mark and Peter Lee, brothers of Ann Lee Hanks, the mother of Lucy Hanks Sparrow, has been doing original genealogical research on the Hanks and Lee families for forty years. She has been a volunteer at the Friendswood, Texas Family History Library Center for 25 years, and has given seminars and talks on genealogical research in (primarily Southern and Virginia) Census Records, Land and Property Records and Will and Probate Records. Her work has been used by Edward Steers and Paul H. Verduin.

Stephan Whitlock is an avocational genealogist and a former native of Illinois with a lifelong interest in Lincoln.

Richard Hileman received a B.A. (english/philosophy) from St. Olaf College, and M.A. (philosophy) and J.D. degrees from the University of Iowa. He is a retired trial lawyer. He has been an avocational genealogist for nearly forty years, and since 1980 has read everything he could find on the maternal ancestry of Nancy Hanks Lincoln, including research in the papers of Caroline Hanks Hitchcock and Louis Warren at the Allen County Public Library, the papers of William Barton at the University of Chicago, and the papers of Arthur E. Morgan at the Library of Congress.

Gerald Haslam is Associate Professor of History at Brigham Young University where he teaches Scandinavian history and Family history. His Ph.D. is in Modern European History. He is a fellow of the Utah Genealogical Association and an Accredited Genealogist by the International Commission for the Accreditation of Professional Genealogists. He has presented two previous papers at the Conference on Illinois History relating to Nancy Hanks and Abraham Lincoln. He is currently writing a book on the family of Nancy Hanks.